Last month, the Exchequer Solutions team was very happy to sponsor a match ball at the Stratford v Sutton Coldfield game during a fundraising day, which also included a Rugby dinner and raffle.

We learnt of the event through our agency partners PSR and Skilled Careers and wanted to get involved to raise funds for Tom Stevenson, a former PSR employee who fell ill in 2020. 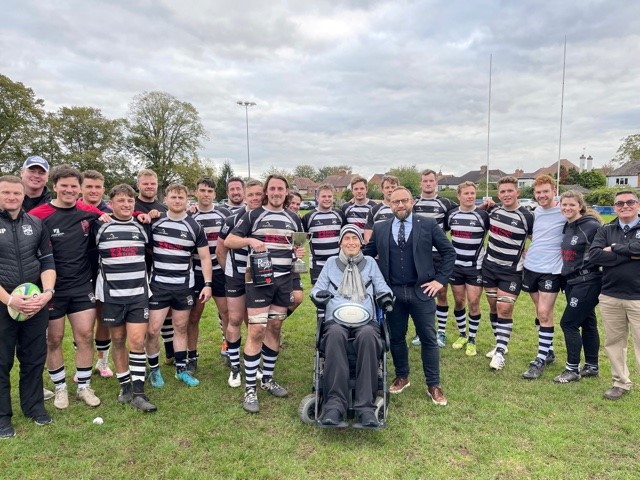 Tom worked at PSR for an amazing ten years, making lifelong friends within the team. Seven years ago, Tom was diagnosed with motor neurone disease, but his health declined significantly last year when he suffered with a serious chest infection, which turned into pneumonia, blood infections, a collapsed lung and resulted in him being hospitalised for six weeks.

Despite these serious health issues, Tom fought hard and is now recovering with his wife and kids. Tom has now taken the decision to step away from PSR but remains an integral part of the family, evidenced by the wonderful fundraising event held for him.

From ages six to thirteen, Tom played for Sutton Coldfield rugby team, so their rugby match against Stratford was the perfect location for the fundraiser, which raised an astounding £2,230 for Tom. To top it off, Sutton Coldfield will be repeating this event as a return fixture in February 2022.

On behalf of the entire Exchequer team, we would like to wish Tom all the best; it was a privilege to be a small part of such a wonderful day.

MD Mike is elected to the FCSA Board

Autumn Budget 2021 – How will this impact contractors?

What is the contractor Loan Charge?